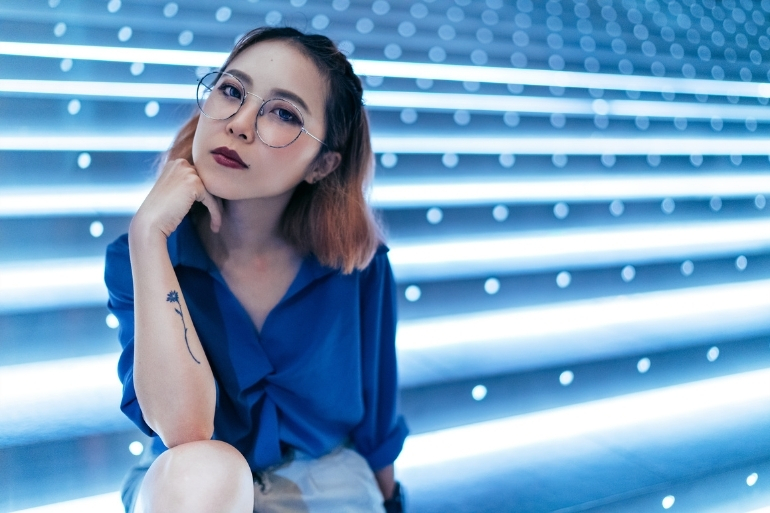 Breaking Down the Blue Aura

Did you know that your personality has a certain color, a particular shade that glows just outside of your physical being?

Your aura functions as an “unseen spiritual energy field” which surrounds not only your body but the bodies of all living creatures.

Even your furry, four-legged friend has an aura of their very own. And while these fields of energy are nearly invisible to the naked eye, with practice, one can learn to perceive the colorful glow that surrounds us.

Your aura can change over time, depending on your circumstances and your current energy (or even the health of your chakras), but most people tend to possess a certain shade for the majority of their lives. And each shade carries with it a unique meaning!

So, what does it mean when you’re surrounded by the cool, calming color, blue? Blue is a prevalent shade in nature and typically associated with peace and calm - does that meaning carry over into the world of auras?

We’re here today to take a deep dive into the blue aura to discover what we have to learn, and if your own aura is the color of the summer sky, you might even learn something about yourself!

The Many Shades of the Blue Aura

When you think of the color blue, there are quite a few hues that may come to mind, from cornflower to cerulean and everything in between. Therefore, there are also quite a few blue aura variations - yours might be sky blue, navy, or even teal.

Let’s explore some various shades of the blue aura to see what they mean.

There’s little in this world as beautiful as the glowing sky above us.

A sky blue aura is indicative of an upbeat person with a positive disposition. This is someone who cares deeply about open, honest communication and making sure that their voices are heard. However, they share their opinions with compassion, as theirs is a sensitive personality. It is said that the lighter the shade of blue, the more optimistic the disposition of the person who’s aura is this color.

If you know someone with a sky blue aura, protect them at all costs. Their compassionate personality is needed in this world.

Turquoise or teal are shades of blue that have a bit of green in them. As there is a connection between the chakras and auras, it is important to note that blue corresponds with the Throat chakra, while green is connected to the Heart chakra. Someone whose aura is a greenish shade of blue is concerned with infusing their words with as much love and kindness as possible.

These folks are natural empaths who prefer peace and negotiation over being right. They will find a compromise in nearly any situation - which means that they are sometimes taken advantage of by others.

Learning to stand up for themselves is something that those with a teal or turquoise aura will have to fight for, as they are much more likely to give in to strong personalities than to fight for their rights.

Darker shades of blue, like royal blue and navy, amplify a personality’s sensitivity even further.

These individuals are naturally intuitive and can sense the energy around them, making it crucial that these folks surround themselves with positive, uplifting friends and colleagues. If someone with a darker blue aura spends too much time near negativity, their mood can get dragged down into the mud.

Self-expression is invaluable for these individuals, who may be naturally creative or artistic. Further, those with royal blue or navy auras are thought to be both generous and nonjudgmental.

Positivity comes naturally to this group, as long as the energy surrounding them isn’t full of negativity.

These folks are deeply spiritual, naturally connected to the collective consciousness that we all share. Those with an indigo aura often have flashes of insight or clairvoyant visions - pay attention to seemingly random visions that occur to your indigo aura friends!

Like each shade of blue, those with an indigo aura are also naturally skilled communicators. They know how to get to the heart of any situation in a way that makes sense to others, and they make great public speakers because of this talent.

These individuals seem to understand certain situations inherently, and they may find themselves frustrated or confused when others don’t pick up on the concepts that come so naturally to them.

Make sure to read: Unlock Your Intuition With Your Third Eye Chakra

While each shade of blue may mean something different, certain traits apply to anyone with a blue aura:

How Your Blue Aura Connects to Your Love Life

In love, a blue aura tends to lead to an expressive individual who isn’t afraid to tell their partner what they want or expect out of a relationship. And because the blue aura is associated with compassion, these folks know how to share their feelings so that they won’t threaten the other person.

A relationship with someone who possesses a blue aura is likely to be filled with mutual understanding, plenty of communication, and empathy.

Blue Auras in the Professional World

Those with a blue aura naturally love to help others, which means they are often attracted to work that has to do with service. They are fantastic listeners, mentors and are often able to guide others in positive ways. Volunteering their time for a cause close to their heart is not uncommon for the blue aura either.

Some of the best careers for the blue aura include:

Do You Have a Blue Aura?

Got the blues? If your aura is blue, it’s time to rejoice! You’re a person who’s creative, self-expressive, and kind to those around you. Your personality is just as welcoming as the pastel hues of a clear sky.

What’s your favorite aspect of this glistening, oceanic aura?

Yo-Yo Dieting: The Science Behind Why It Never Works

How to Grieve Mindfully

A Mantra for Each Enneagram Personality Type