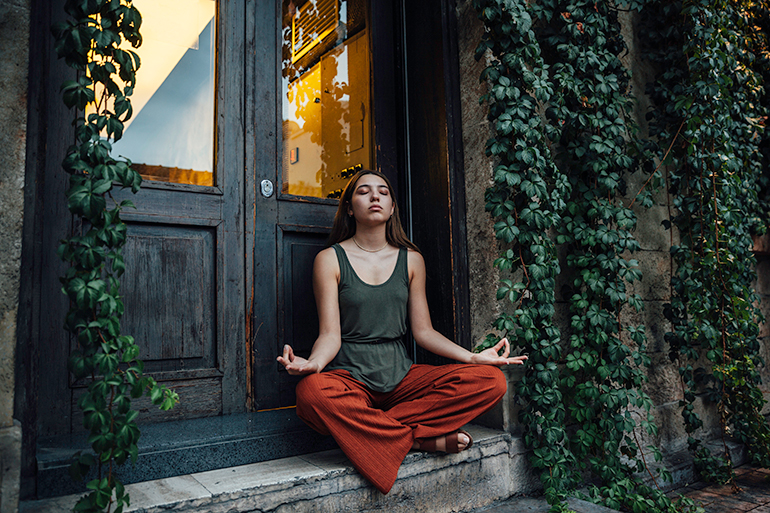 One of the most popular forms of meditation techniques among celebrities is transcendental meditation (TM). If you’re looking for some natural anxiety relief or wanting to kick a bad habit, TM can help you. With so many options for meditation today, it can to understand the differences and pick which is best for you. They say ‘knowledge is power’ and the more tools you have at your disposal among the holistic health solutions, the more equipped you will be to handle whatever life may throw at you.

What Is Transcendental Meditation?

Transcendental meditation is a meditation technique that engages you in a state of “transcending” your usual state of consciousness.

Transcendental meditation twice a day for twenty minutes and involves the use of silent mantra. To TM, that you learn from a certified practitioner. TM involves no religious rituals, which makes it appealing to anyone.

For the skeptic in you, there are plenty of studies that have been conducted about what TM does to the brain and physical body.

Where Did Transcendental Meditation Come From?

in many countries as we entered the early 2000s.

The Maharishi Mahesh Yogi, who is credited with bringing this form of meditation to the west, lived until 2008. The yogi was a student of Guru Dev in and made a non-Hindu version of Vedic meditation international in the 1950s with the goal of spreading peace. In 1958, he left India to tour Myanmar with his technique, which he then called Transcendental Deep Meditation. After six months, in 1959, he took the tour to San Francisco, Los Angeles, London, and Germany. The history of this yogi is tied to none other than the Beatles. He was the guru of the Beatles who televised their spiritual journey to enlightenment and popularized TM.

The successor to Maharishi is Tony Nader. David Lynch, the film director, is another major figure in TM. He is helping to bring it to inner-city schools and offer scholarships for people to study. It’s now prescribed by doctors and approved by the American Heart Association.

How Much Transcendental Meditation Courses Cost

Before we tell you how much it costs, think about how expensive it can be not to have your health whether it’s emotional or physical. Seeking emotional release in unhealthy ways can end up costing you your peace, land you in toxic relationships, send you into a substance abuse spiral, or depression. The costs of meditation are relevant to your quality of life and how much you actually enjoy it. That being said, classes are usually in the hundreds of dollars range with multiple-day training costing more.

You can always dig around for payment plans and assistance programs, and as someone who went through the process of meditation training on a shoestring budget, I just want to say, don’t let cost deter you because the benefits are massive. The long-term benefits of this are invaluable and in the testimonies of so many people, more than worth it.

The Benefits of Meditation:

Let’s start with the basics, which are meditation effects that most people experience regardless of which kind of meditation they are practicing.

Meditation can help with:

TM specifically has been praised for its ability to aid in performance. Many businessmen, athletes, and students have attributed their improved state of thinking to TM for the clarity and creativity it provides. Making the brain function optimally is a complex scientific process right? Well interestingly, brain scan images have shown that the entire brain becomes more active in people who meditate, including the beginners. It’s now reportedly used by investors to make good business moves, as well as artists or anyone looking to expand their minds naturally.

Not only does meditation lower risk of stroke and heart disease, but it can also improve your relationships, intelligence, and focus, making it an especially beneficial practice for people with ADHD. It’s also been used extensively for post-traumatic stress disorder as well. We know that cognitive degeneration and early onset Alzheimer’s are very real problems that can impede our ability to function in older age. But anxiety and substance abuse in our younger years often leads to the choices that are the root causes of those later symptoms. Instead of turning to unhealthy foods or substances to handle the pressure of life, try this simple technique. It also helps improve memory, productivity, and reduces the chemical cortisol which can create painful inflammation and hormonal imbalances.

Read this next: Beginner’s Guide to Kundalini Yoga

Interested in learning more? We’ve scoured the web for all the resources you would need to learn more and even begin transcendental meditation.

First is this book by Bob Roth, Strength in Silence: The Power of Transcendental Meditation. The book offers a straightforward explanation of how this form of meditation will help you in mind, body, and soul. There are plenty of famous names that sing the praises of TM including Oprah, Clint Eastwood, Hugh Jackman, Ellen DeGeneres, Gwyneth Paltrow, Cameron Diaz, Jennifer Aniston, and many more. If you’re interested in finding a local teacher, use this list. You can also explore the TM YouTube channel.

Here at Daily Life, we spend every day coming up with ideas and collecting practices that will help you develop a lifestyle that is positive and empowered. If you’ve made it to the end of this article and you’re already thinking about doing something else, just pause for one moment. There’s a saying that helps conquer our very real addiction to productivity that might just tip you into the pool of actually doing meditation. They say everyone should meditate ten minutes each day but if you’re too busy to do that, you should meditate an hour each day. TM is one way to go within to reach a real experience of interconnectedness that brings you ultimate peace. So many of our health conditions have been linked back to stress, and we can unlock our full potential by going to this peaceful state.