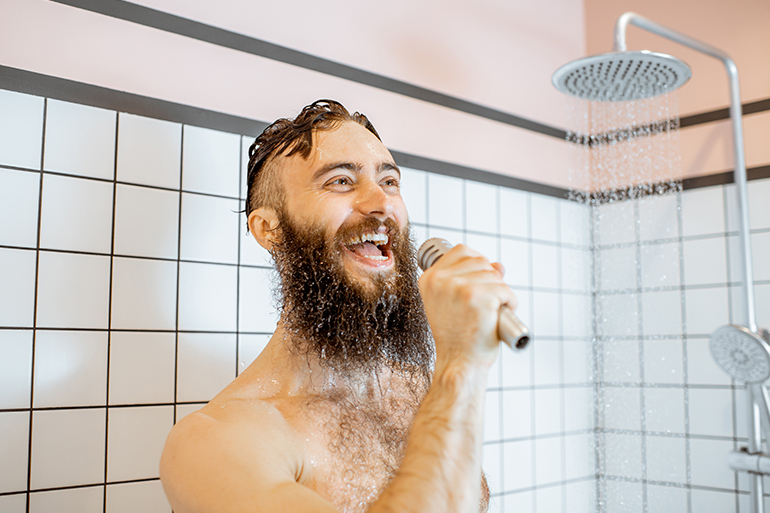 Picture this: you’re in the shower, covered in suds, and your favorite song comes on the radio. What do you do? If your answer is “listen,” you’re doing it wrong! The shower is the perfect venue for singing your heart out, and there’s science to prove it.

Why Do We Sing in the Shower?

It turns out there are quite a few reasons that we tend to belt it out while we’re cleaning up. The first reason seems to do with our comfort levels—it turns out we’re pretty relaxed in the shower, giving us the confidence to act like we’re on Broadway, our shampoo bottle acting as the microphone carrying our voice through the cheering crowd.

Think about it: if you’re comfortable enough to strip down to your birthday suit, chances are you’re willing to carry a tune. After all, it’s only you in there.

Now that we know a bit more about our urge to channel our inner Celine Dion in the shower, let’s take a look at a few reasons why you definitely should be singing in the shower.

Read This Next: Stick to It: The Benefits of Positive Self-Affirmation

The Surprising Benefits of Singing in the Shower

Singing in the shower helps your body consume and retain more oxygen, which in turn helps your circulation. Breaking out into song when you’re getting all soapy literally gets your heart pumping and helps you feel calmer. Once you start singing, your blood begins pumping more rapidly, helping you feel more energized. It also releases dopamine, the feel-good chemical that boosts your mood. (You know, the one we usually turn to chocolate to get).

Now, you can have all the dopamine with none of the calories. In fact, singing in the shower produces similar effects to meditation.

It has also been shown that singing itself releases endorphins and oxytocin—two chemicals within the body that further elevate your mood and alleviate anxiety. Oxytocin is known as the bonding chemical, because it is often released during moments of connection with others, such as an embrace. As such, when it released within our bodies, it reduces feelings of depression or loneliness. Singing in the shower is like receiving a giant, comforting hug from the Universe.

The bathroom probably has the best acoustics in the home for jam-session-for-one. Think about how amazing you sound in there! With your voice booming all around you, you can easily hear yourself and revel in the vocal stylings of you.

Pretend you’re auditioning for The Voice or starring in your own Vegas special. Prepare your set list before you turn on the water by putting a playlist of your favorite songs together. Grab a waterproof Bluetooth speaker and press play or perform an acapella set with nothing but you and your gorgeous voice. Either way, you’ll sound amazing.

It Boosts Your Immune System

Thanks to this German study, we now know that singing can actually improve your immune system, while also positively influencing your emotional state. The study showed that the levels of immunoglobin A—a protein that fights infection—was much higher in the subjects after performing Mozart’s requiem than before. Knowing that busting out a Foggy Mountain Breakdown in the shower can make your body healthier, you’re almost obligated to do so.

Another study performed in Sweden found that singing in a choir had calming effects on the participants’ hearts. The participants were attached to heart monitors that observed a slowing in their heart rate once they began singing together. We all wake up with anxiety some days—why not hop in the shower, turn on your favorite song, and feel the soothing effects of a self-serenade?

Singing has been shown to reduce pain in chronic pain patients, meaning that getting a little Olivia Newton-John in the shower and performing your favorite song from Grease can help you cope with pain in your body. Bonus points if you can break out a little boogie and lubricate those joints, showers, and singing clearly go together like shoo-bop sha wadda wadda yippity boom de boom.

Why Aren’t You Singing Already?

Self-care comes in all shapes, sizes, and flavors. Sometimes self-care can be as simple as turning on the hot water, hopping in the shower, and singing your favorite pop song. Squash any feelings of silliness, or better yet, embrace being silly.

Forget about what anyone in your house might think. Don’t worry about what you sound like or what songs you want to play. Just take that moment of solitude and cleansing to sing your heart out, and revel in the many benefits.

Related Article: The Essential Guide to Your Throat Chakra

How to Show Up for Yourself During Hard Times

Start Your Day With These 5 Positive Journal Prompts

A Root Chakra Meditation to Balance & Ground Yourself

How to Make Pasta Alla Norma