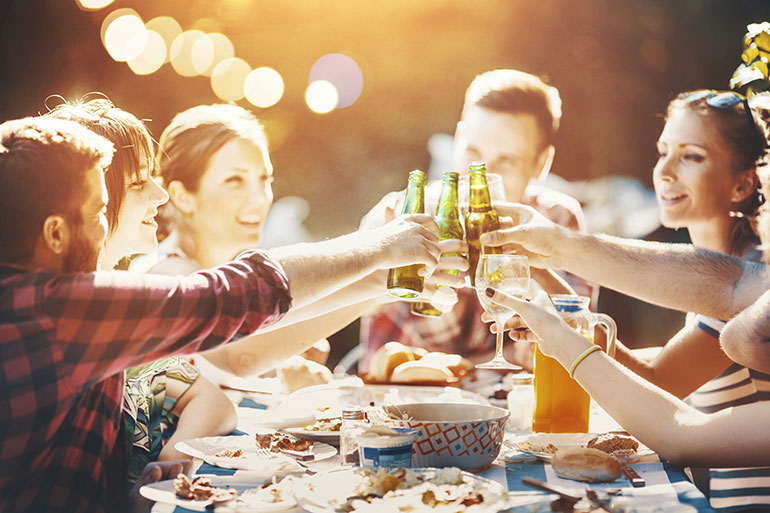 What Do Sober People Do For Fun?

Alcohol turns down the volume on real life. At least that was my experience when I realized I was going to send myself to AA in college. I felt numb when I wasn’t drinking. It took years to figure out how I could have fun if I wasn’t getting schmammered in a club trying to look cool.

Here’s a little about my personal journey that has led me to be really, honestly, really excited to wake up in the morning. Life is fun now, it’s humorous and exciting. I didn’t think it could be like this but honestly, it’s so much better than drinking that no one could convince me to drink now.

Sober is normal. We are actually hardwired to enjoy being ourselves. Sobriety can turn the volume back up on the world. You’ll start to notice the nuances that make you burst out laughing playing games and the depth of emotions that come alive in you when going to see live music.

I don’t know about you, but I didn’t know what the heck to do when alcohol wasn’t involved. So here are the things I found over the years that worked. Some of them involve other people and some don’t. I know, shocker! I didn’t know it was possible to have fun on your own!

Ways To Have Fun While Sober

Doing Nice Things For Other People

This one made the top of the list for a reason. If there’s one way to stop feeling depressed, it’s to do something kind. It can be silly, minor, or major. I made a point to try to tell more people happy birthday, do things to cheer up my mom, and be more present to the important moments in other people’s lives, even if it just meant checking in with them after their first day of work or taking a walk to see how they were doing.

Helping people became my addiction and I’ll be honest, it was a heck of a lot less painful (and a lot less expensive). The brain releases happy chemicals in our brain when we nurture others. If the world was addicted to those chemicals instead, we’d be a lot better off. It certainly doesn’t kill brain cells, but it does kill sadness.

For those of us type A people that don’t want to show weakness, want to be good at everything, have seemingly endless energy, an active mind, are a bit of show off-y and like to be around people, this is one sober activity that checks all those boxes. Rock climbing is incredibly difficult, it takes a lot of physical and mental brain power. You literally can’t get good at it without being social or you’ll never excel.

One of my replacement addictions became training in different circus skills because again, they are super difficult and you have to be around other people to learn. Plus, you’ll actually do better and excel if you don’t drink, so you’re rewarded for your sobriety. It takes so much brain power and physical energy that in order to get good, you won’t have time to bother with partying. If you get involved with activities that require sobriety, it motivates you to keep the beverages hydrating and not poisoning, right? Lots of acrobatic aficionados are sober too!

I found it exciting to set a goal that seemed impossible and study the techniques, muscle mass, body recovery, diet, and ligaments that I needed to understand to make the impossible, possible. I also found this helped me be proud of sobriety and use it to promote the lifestyle to friends that could benefit from putting down the bottle.

Stretching your culinary abilities and sharing the cost and the cleaning is a fun way to get social without giving yourself a hangover. Admittedly, we overeat often, but a sugar headache is a whole lot more manageable than a debilitating hangover. A group of my friends gathers on Friday nights for an intentional loving hang sesh, and it’s just as exhilarating as getting all dolled up to go to a nightclub. More importantly, it’s enriched our connections to each other.

Getting vulnerable is fascinating. Alcohol definitely gets people to open up, but it also shuts us down when we are sober. The thrill of being both sober and vulnerable is a rush like no other. Crying in front of people, realizing your own self-sabotaging behaviors and getting rid of them, and getting high through breath-focused meditations have become my favorite way to experience heightened consciousness.

Kundalini yoga is one type of group meditation that I can honestly say makes people drunk on oxygen alone. Everyone feels great for free and they get more healthy in the process. It’s a no-brainer.

Expanding your mind builds confidence and gives you new healthy and productive ways to use your time. Plus, education-focused environments tend not to attract lowlifes that could push you towards the bottom of a bottle.

Even after college, we can become pilots, yoga teachers, scuba divers, you name it. I found following my interests led me to work that I loved. I slowly developed a network of people that led to volunteer opportunities, life-long friendships, as well as actual jobs.

Ultimately, finding your passion can excite you a lot more than a martini. Many people turn to drinking because they aren’t following their passions and are in a spiritual crisis because they don’t have passion for the way they make money.

This one saved me. I started with vinyasa and tried lots of different teachers, studios, styles, and times of the day. It was a good way to spend Friday nights and still is. Kundalini yoga was the most effective for the depression I experienced trying to enjoy life without alcohol. It worked much better than I even knew was possible, to the point where it also helped me overcome the root causes of my drinking. I’m still insecure, but much more aware of how it affects me so I don’t make decisions from those insecurities.

Did I mention this is my favorite vice? I went overboard in my sobriety, but it didn’t kill me! I love coffee. I look forward to a great cup of joe to this day. I love getting together with a crush for a hot, steamy… beverage. But seriously, if you’re going to be addicted to something, it might as well be something that boosts digestion, right? I’ve found a healthy relationship with coffee, but I’m still holding onto the idea that coffee proves that there is a God. It also proves my ability to talk too much.

When I turned 30, I hadn’t built a group of sober friends, so I got my family to go camping to show them some good clean fun. We made animals out of playdough, made vegan burgers, saw a really large snake, and burned incense on the beach. It was perfect in every way, fun and fulfilling.

Nature is very inspiring and healing. Even going hiking can help release endorphins and clear negativity. If you don’t have people to camp with just like I often don’t, just go for a hike.

Guilty pleasure! I found the messages of sci-fi movies and kung fu movies to really inspire my sobriety. The subjects are about something bigger than ourselves. They get me fired up about using my time to help the world and not drown myself in light beer. We all need inspiration and sometimes that inspiration is readily available at our fingertips in movies, books, and TV shows.

This helps when you’re emotional. You can use colors to help you visualize moving from negative to positive. You don’t have to be a good artist because art is something personal and expressive.

This can be exciting because you can shape ideas and stories that influence people. I studied screenwriting, tried, failed, and tried again. It was exhilarating. Writing was so fun that it became my full time job without meaning for it to happen. I loved the ability I developed to share openly and dig deep within myself. Many great writers had to overcome major hardships like addiction to find their passions.

I loved finding books, studying esoteric subjects, learning about magic. Heck, I still do as a healer. I get butterflies when I go to a metaphysical center because the volume on my life and energy rises. I can really sense the incredible loving energy present in these spiritual places.

Sometimes when I was really stuck or unable to find a way to get through the darkness, I’d go get a reading. I went to a few sketchy places, but eventually found some really incredible healers that were so helpful, accurate, and gifted that I had to learn more about how they were able to pinpoint my thoughts and life so accurately. It helped me realize the existence of helpful spiritual entities and helped me see the bigger picture of my soul and the purpose that I have here in this life. It was a game changer.

I was very embarrassed about trying to get sober. I didn’t know anyone that was sober and I didn’t know who to talk to about it or how to handle the fact that my life was out of control. I isolated myself out of self-protection at first because I didn’t trust myself or anyone else. I wish I had known life would be more fun sober, and that I could stop carrying around guilt and punishing myself for the slips ups I’d had.

Check out this great article for some fun perspectives on having fun while sober, and this one for more ideas of what sober people do for fun.

I found my mind tuned into a different reality when I got sober. I wasn’t so easily influenced by the ideas that kept me in jobs I hated. I wasn’t pressured to be a part of the crowd. I found I was able to explore spirituality and tap into my ability to manifest, lead, and inspire people to a new way of living and actually meet spiritual guides. None of that would have happened if I wasn’t sober. My mind wouldn’t have been able to stretch that far. That level of fulfillment was never there, even in the VIP section of an NYC nightclub peppered with celebrities that inflated my ego temporarily.

Even if you feel alone in your struggle, know that there are many other people who have been through a similar experience and have come out stronger on the other side.

What Type of Camping You Should Do This Summer

How You Can Help When Your Partner Is Hurting

How to Know if Online Therapy is Right for You

How to Accept & Surrender to Unexpected Change

A Shower Meditation to Cleanse Negativity

Selfies & Self-Love: What Selfies Can Do for Your Self-Esteem