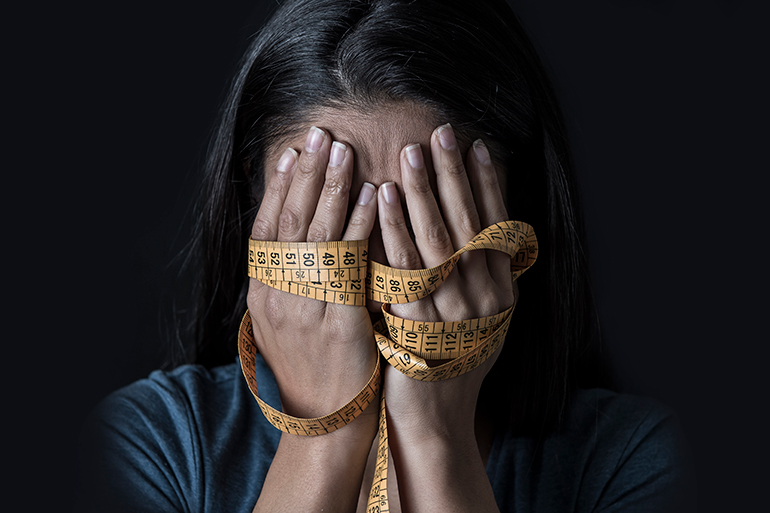 Bulimia - it can be hard to detect. A person with bulimia may act normally, eat normally, and weigh a relatively normal weight. From the outside, everything checks out.

It’s easy to hide and easy to miss. If they don’t look sick, they can’t be sick - right? Wrong.

When you think of eating disorders, you likely think of someone wasting away. And unfortunately, weight is often thought of as the main indicator of a serious eating disorder.

In truth, eating disorders are a mental health issue. Does your friend or daughter constantly talk about their weight? Do they work out all the time (and by all the time, do they miss or skip out on other events just to workout)? Do they constantly bring the conversation back to eating? These should be viewed as serious red flags.

But wait - what is Bulimia?

Bulimia nervosa is a serious eating disorder where the person induces vomiting, abuses laxatives or diuretics, or participates in excessive exercising or fasting after binge eating. It can include a combination of these things or one without the other.

The Rise of Eating Disorders

With technology and being able to connect with more people faster than ever before, it’s no wonder eating disorders are on the rise. The pressure is on to look your best - All. The. Time. Who knows if that lunch trip will turn into an Instagram worthy photo?

The media puts the pressure on. Our social networks layer it on. And the age of those affected continues to drop lower and lower. Reports indicate that girls as young as 5 years old are seeking out help to combat their eating disorders.

It’s not a new issue. But, it’s one that deserves attention. In the States alone, almost 5 million females and 1.5 million males struggle with bulimia. And those are just the numbers that are reported. It doesn’t include the millions more that suffer in silence and alone.

How Can You Tell if Someone You Know Has Bulimia?

Awareness is key to supporting and helping the people you love. If you are worried about someone, keep a lookout for these signs and symptoms:

If you suspect your friend or a family member has bulimia, talk to them. Don’t accuse, but breach the topic coming from a place of understanding and compassion.

There are a variety of causes. It may vary from person to person or be a combination of many factors. According to the Mayo Clinic, genetics, biology, emotional health, mental health, and societal expectations may all play a part.

For example, depression or anxiety disorders may play a significant role in someone’s eating disorder. They may have negative feelings about themselves. They may feel self-conscious or have a low self-esteem. It’s a complicated issue, and not often with just one direct cause.

The Health Complications of Bulimia

It might sound like no big deal - what’s the harm? If they have a normal weight and don’t appear to be wasting away, they must be fine, no biggie. Wrong. This is why it’s so important to talk about. It can lead to an array of other health problems. Not to mention, it can be a cry for help regarding another health issue, such as depression. Bulimia is not something that should be ignored.

And unfortunately, there isn’t an exact way to prevent it. A person may become bulimic during traumatic times in their life or during big changes - such as puberty. It might pose a way to gain back control. However, each case is different. But supporting body positivity and promoting healthy habits can go a long way.

Society is getting better at this. At least, we are really trying to get better at it. Media campaigns, such as the Dove Self-Esteem Project or the #losehatenotweight hashtag, strive to promote positivity. There is a major pull for helping individuals view themselves in a positive light - in turn, the hope is that everyone will feel good about themselves.

The majority would much rather lift each other up than cut each other down. And we can also promote and encourage this concept in our everyday lives. Spread love instead of hate. Your mother was onto something when she told you, “If you don’t have anything nice to say, don’t say it at all.” Nothing good comes from it.

Surprisingly, recent studies show that mindfulness may even play a role in fostering a healthy body image. Non-judgemental and present-in-the-moment individuals proved to have a healthier relationship with food, their health, and their bodies. They don’t focus on negative thoughts. They accept who they are. And these are important messages to send - especially to young girls.

Know You’re Worth It

If you know someone or you, yourself, have been struggling with bulimia, seek out help. The resources are there, and treatment and recovery are better than ever before. Doctors take a holistic approach. They take into account behavioral therapy and underlying issues.

If you’re worried about your relationship with food, or even that you have been struggling with binge eating in general and are looking to break a pattern, look to this Psychology Today article by Glenn Livingston, Ph.D. on How to Stop Binge Eating in Three Unusual Steps.

You aren’t alone. Talk about it. Talk to someone. And let’s all be a little nicer to each other.

Related article: Body Positivity - What Our Editors Are Dying to Show Off This Spring!

Mental Benefits of Reading - How Books Keep You Grounded

How to Activate Your Upper Chakras to Increase Creativity

Everything You Need to Know About Donating Blood

Trash to Treasure: All About Upcycling

Is Your Career is Hurting Your Mental Health? Here’s What to Do Next