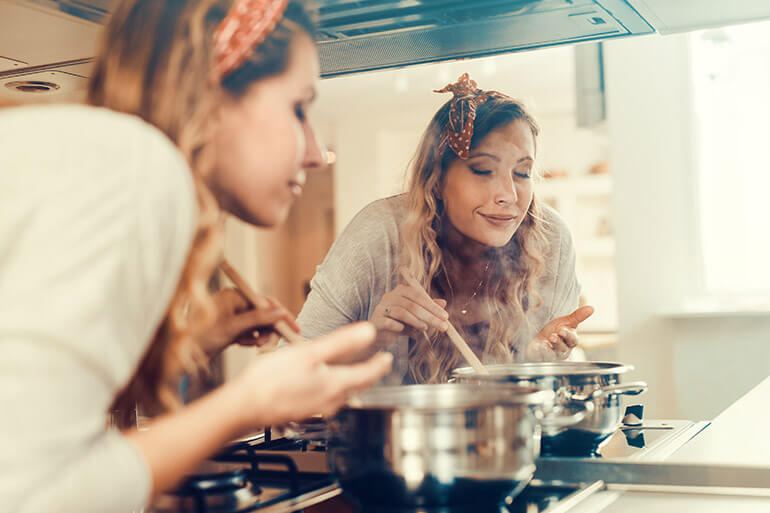 The Bone Broth Hype & What You Need to Know

Just in time for Halloween, bone broth is the spoooookiest new food fad.

But one thing’s for sure, as the weather gets colder, warm soups and broths are looking more and more enticing. And bone broth is one healthy food trend you’ll want to get on board with.

Surprisingly, bone broth has been around for a while - we just never paid much attention to it - until now. In the past, civilizations used it as a remedy for not just colds and the flu, but also for conditions affecting the gastrointestinal system, the joints, the muscles, and the skin. And while many stopped making it at home, the health benefits are once again making it a staple part in household cooking.

What is Bone Broth?

Bone broth is a soup base made from animal bones. The cool thing about it? You essentially use every part of the boned meat. You are soaking up all the nutrients and minerals possible.

Typically, the bones are placed in a stock pot of water and vinegar. The water is brought to a boil. Then, depending on the type of bones you use, the time that you want to simmer it for, is anywhere from 8-72 hours (yes, you read that right!). It’s a long process, but one that leaves you with a soup base - prepping your meals for later. You can also use it for sauces or gravy.

The last step to this healthy food is straining out the boney bits. The last thing you want is little pieces of bone in your soup!

The Health Benefits of Bone Broth

As with any healthy food fad, stories and health claims tend to run rampant. So, let’s set the story straight.

One of the biggest boosted health benefits is that we absorb the collagen that is in bone broth. In turn, it is thought to go straight to building strong bones. Unfortunately, this popular belief is false. It is often used in other biochemical processes before making its way to our bones.

And apparently, there’s next to no proof citing its use for a leaky gut. Although, that isn’t to say it doesn’t help some. Or that it isn’t easy on the digestive system. Soup is an easy way to get nutrients - especially when your stomach isn’t feeling too hot. Throw in some nutritious veggies and you’re set.

Now, you’re probably thinking, “okay, so what’s so good about it?”

We did some research - here are a few proven health benefits of bone broth. The hype isn’t all for naught.

It Actually Does Help Ease the Common Cold

If chicken soup is your go-to when you’re sick, you really are doing yourself a favour! Amino acids in chicken bone broth have been found to decrease inflammation in the respiratory tract and the digestive system.

It is good for you - don’t get us wrong. However, the nutrients it contains entirely depends on the type of bones you use. Animal bones are full of potassium, calcium, magnesium, as well as other trace minerals. If you make your broth from fish, you get the added bonus of iodine. Iodine is good for normal thyroid function.

You further get vitamin A, K2, zinc, iron, and more. It’s jam-packed with all the tiny minerals that we sometimes don’t get at all on a daily basis.

As previously mentioned, bone broth is a food your stomach can handle - even when you aren’t feeling 100%. It may also help in digesting other foods. Although, studies do tend to be vague in this regard.

We mentioned this above as well. Yet, bone broth may also help fight inflammation that is associated with obese individuals. In those that are obese, high blood levels of arginine were found to lower inflammation. Thus, supplementing arginine - which is found in bone broth - can help. Again, more studies are needed - as the only proof of this working was in rats. Human studies have yet to be completed.

Bone broth is low in calories - yet so filling. This means you will feel satisfied but won’t overdo it on the energy consumption front. Studies whole-heartedly support this - and it’s likely why some soup diets have done so well. However, we by no means recommend dieting to lose weight. Instead, focus on lifestyle changes - which can include bone broth-based soups!

Don’t be too quick to throw away those unused meat bones. Save them or store them - you can place them in your freezer until you’re ready to make broth.

After you have successfully made your first batch, you can keep it in your fridge for about 5 days. If you want to store it longer, opt for the freezer.

How often do you need to consume it for maximum effects? There isn’t a set point for this. Have it every day or once a week. This is totally up to you!

What else can you make from it besides soups? Try tomato sauces, gravy, and more! There are so many recipes out there - and they don’t disappoint. Homemade is the way to go. You can add it to pasta, stir fry - it’s really quite limitless. A quick search in Google will offer an array of options for you to choose from.

So, why not give it a try? It’s not super labour-intensive, but it does require waiting to let your broth simmer - this gets all those nutrients out of the bones.

Make a big batch at a time and stock up on your homemade soups or sauces for the winter months! You won’t have to worry about throwing dinner or lunch together - plus, it’ll keep you warm on those colder days.

Try something new - go for a homemade and healthier version of soup (heads up: most of the soups found down your grocery aisle don’t offer the same benefits). Grab those leftover turkey or chicken bones from Thanksgiving, Christmas, or the last small gathering. Don’t waste them. Instead, make a delicious and healthy soup. Then, repeat and enjoy through the winter season! You can thank us later.

The Conscious Closet: The Basics of a Sustainable Wardrobe

Breathwork for Releasing Negativity From Your Life