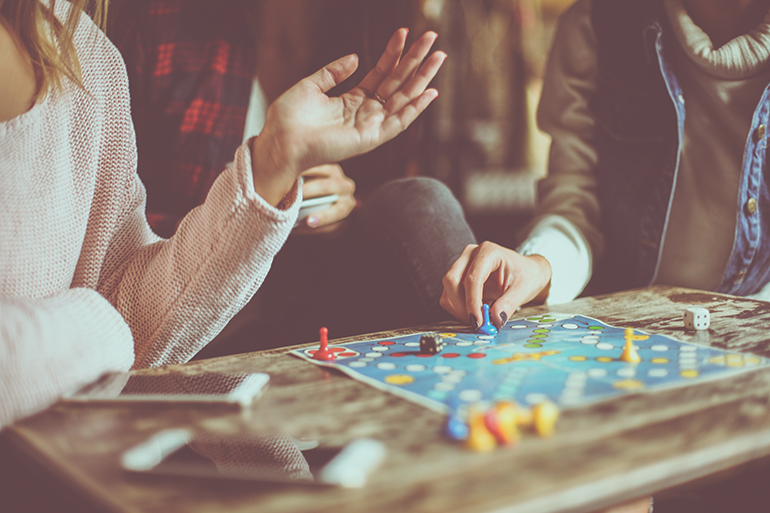 Snowed In? Here Are Our Top 10 Board Games to Pass the Time

Who doesn’t love a good board game?

They’re fun. Often, they are easy to learn and play. And surprisingly, they offer health and wellness benefits galore (we aren’t kidding).

In a world where we rely on technology a lot of the time, board games provide an easy way to use your ‘noggin. They force you to use your brain for problem-solving and decision making. And they reduce your risk of Alzheimer’s Disease.

They allow you to de-stress and relax - and just have fun. Board games also bring people closer together. So, if you’re looking for a way to solidify and strengthen your family or friend relationships, a good ol’ board game is a sure-fire way to do so.

But what should you play? We’ve got the top 10 board games for you and your family.

Snowed in? Here are some great ways to pass the time - as well as reap the above benefits.

This game is great for the whole family. It involves a bit of strategy - as well as knowing your audience.

Basically, you’re split up into 2 teams. And it requires at least 4 or more people (so 2 or more on each team). Each team chooses 1 of the 2 colours. You then choose a spymaster. The spymasters sit on the same side of the table. They are the only ones on the team that know which cards - based on colour - laid out on the table belong to their team. When it’s their turn, they give a hint in the form of 1 word and indicated how many cards it hints at. The team then must guess which cards are theirs based on the hint given.

You win by revealing all your cards - or “agents.” Yet, if you choose the card that is the assassin, you automatically lose.

It might sound confusing. But once you get into the first round, you catch on. It’s a game of strategy, guessing, and fun.

Tired of regular monopoly? Or do you find that you never seem to finish a game of real monopoly? Monopoly Deal is played with cards rather than a board. And it’s a ton of fun.

It sticks to the main rules of regular monopoly, but it takes less time and the cards take up less shelf space. It further requires a huge amount of strategy. If you like monopoly but hate how long it is, this one is worth a shot. You can play it with just 2 players or more.

This board game consists of a lot of destruction, sacrifices, and you guessed it, unicorns. Start building your unicorn army.

This is another one you can play with just 2 players - but it can include much more. The goal depends on the number of players. Basically, you want to build the biggest unicorn army - and the number of unicorns in your army to win is based on how many people are playing.

It takes some getting used to and like any other game, you definitely need a few rounds to get the hang of it. But once you do, you’ll want to play it again and again. Make sure to read all the cards carefully!

Catan’s been around forever - at least it feels that way. You want to be the first player to get to 10 victory points. How do you get victory points? You settle areas and build cities!

It might sound kind of dry. Yet, Catan is anything but that. The game is designed to play with 3 or more players. And it can get seriously competitive. Try it out!

This board game is definitely one you’ll want to play with the family or pull out when you have guests over. It’s a very similar concept to the popular Cards Against Humanity game - but more kid and family friendly. It’s another one where you have to know your audience - or in this case, know the judge and their preferences. Make each other laugh! Have fun with it. It’s a game where you can talk and chat throughout as it doesn’t require as much concentration or focus as other ones.

Your goal: Solve the Murder Mystery.

You have 6 guests over for dinner. However, things have taken a turn for the worst. 1 guest has been murdered. Who did it? Where did they do it? With what did they do it? It’s up to you and the other guests to find out. The person who solves the mystery wins.

It sounds a little twisted - and okay, the concept kind of is. But this game is quick and exciting. The exploding kitten cards eliminate players - one at a time. You want to be the last player standing. And there are specific cards - like the diffuse card - that can help you get there. It involves a bit of strategy and a lot of luck.

Telestrations is kind of like broken telephone - you know the game where you whisper in each others’ ears a phrase, and that phrase, by the time it got to the last person often ends up misconstrued and somewhat far from the original version. It’s exactly that - except you draw instead of whisper.

The first person gets a phrase. They draw that phrase. The next person must guess what they think the person tried to draw. The next person draws what that person guessed and so on until everyone has had a turn around the table. It’s hilarious watching how your starting phrase gets interpreted differently by each person.

Test your vocabulary and counting skills via Scattergories. This board game has been around since 1988. It requires you to think fast as you race against the timer to write down answers on the category list - and match the letter on the dice. This game requires 2-6 players and is quick and fun.

Okay, so we might be cheating by having a 2-in-1. But when you’re stumped as to what to play and you’ve only got 2 of you, checkers or chess is an excellent go-to. It takes a ton of strategy. Plus, with practice, you can get really good at either game. Most sets come with chess and checker options. This way you can mix it up and switch it up.

The only way to find out if the 10 board games above are right for you is to give them a try. Most of them cost less than $20-30 and will provide hours upon hours of fun. Test your knowledge and strategy skills. Challenge your family to any of the games above during the next snow day that comes your way.

10 Mantras for Following Your Intuition

5 Ways to Get Rid of Your Headaches

7 Unhealthy Morning Habits You Need to Quit Immediately in 2021