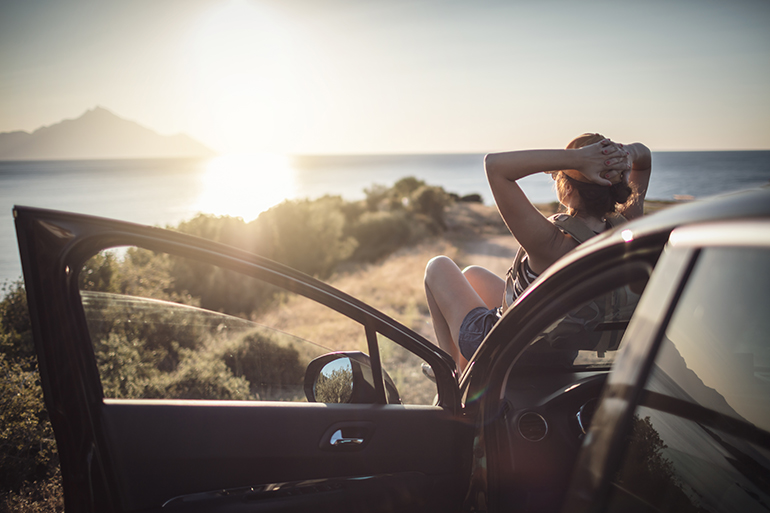 I Lived in a Ford Focus for 3 Months: Here’s What I Learned

On January 20th, 2017, my now-boyfriend and I set out on a 3-month adventure through the United States and Canada. We transformed his - now our - 2000 hatchback Ford Focus into a car camper. We took the back seats out, constructed a bed frame, and with the front seats pushed forward, we had a full bed - big enough to fit 2 people comfortably.

We drove over 22,000 km - or 13,600 miles - in the United States and Canada, saw over 20 states, and surprisingly, didn’t kill each other (in other words, neither of us ended up flying home, which was our back-up plan if we couldn’t stand each other).

It’s a bit of an understatement to say I learned a lot. That trip changed my life.

Let’s Start From the Beginning…

Life sometimes feels like a game of chess. You’re making all the right moves - or you think you are. Suddenly, checkmate. You’re trapped - or that’s how it feels.

That’s how I felt late 2016 - trapped. I’d graduated from university a couple of years prior. Reality hit me smack in the face. I felt pushed into a corner and I couldn’t get out. I was stuck. I’m sure a lot of people can relate.

I was working the same job for the last few years. There was no moving up in my position. There were no real chances of a pay raise in the near future. I was working extra hours to try to make up for it, but I was barely getting by.

My bank account and I were in a constant battle. I was lucky if I had money left over to buy new clothes or go out for dinner and drinks with friends. It was a struggle to balance my drowning debt, as well as keep up some kind of social life.

And I was starting to dislike myself. I had somewhat recently ended a toxic relationship. I lived alone. Part of me wanted to go back to school - but wait, I couldn’t afford that. My life felt out of my control. I felt a sense of impending doom. Was this it for the rest of my life?

But unlike a game of chess, the game of life isn’t necessarily limited by rules. I let my beliefs become limited. I was worried about what I ‘should’ be doing and not what I really wanted to be doing.

I remember talking with my mom before I left for 3 months. She looked at me a bit sideways and said, “Don’t you think this is a little crazy?” In a way, it was.

In reality, I could’ve gone back to school. I could’ve applied for another student loan. I could’ve got another job. I had interviews at other companies (I even got a job offer). For some people, that type of change is exactly what they need. I’m sure it would’ve worked for me too.

But then I met someone.

Sometimes, it takes just one person to flip your worldview upside-down. And sometimes, we all need a serious change in perspective.

He said he was leaving for 3 months. And I could come - if I wanted.

We had already tested out the car camper on a short 10-day trip across the east coast of Canada. But 2 major obstacles stood in my way: I couldn’t afford my apartment while traveling for 3 months, and I had a full-time job in Ottawa.

I was prepared to quit my job. Technically, I did quit my job. But my boss proposed a counter-offer. She suggested I take a 3-month leave of absence.

With my job situation settled, I threw pictures of my apartment up online. Within a week, I found someone to sublet my place for the length of my trip.

Things couldn’t have worked out better. It felt fated. And soon, I was off on an adventure of a lifetime, learning some of the most valuable life lessons firsthand.

Today, I want to share them with you from the comfort of your computer screen. Ford Focus not required!

Not to sound cliche, but it’s true.

We were limited by what we could bring for 3 months. We had to have enough room to sleep in the back of the car. Thus, the clothing and items that we both brought were minimal. Clothing was multi-functional. Essentially, I lived in yoga clothes.

I was also forced to clean out my apartment before I left. I had to fit my life - minus my furniture - in a small storage space in the basement of my building.

I threw out a ton of items. When I got back, even more items were tossed or given away. It was a process. But afterward, I felt lighter. It was like a detox. And it felt good. The hype around Marie Kondo and Minimalism is 100% justified.

Basically, I traded ‘stuff’ for experiences.

And I’m still living that life. I’d much rather pay to go or do something than spend money on something I might wear once. All those mental health articles about decluttering aren’t messing around. You really do feel better after ridding yourself of excessive baggage.

Lesson #2: ‘Stuck’ is a Matter of Perspective

Next time you think ‘I can’t,’ ask yourself why. What if you switched that to ‘I can’ or ‘I will’? What if you started calling yourself out on your limiting beliefs? What if you pushed out of your comfort zone a little more? You control your life. You make the decisions.

You aren’t stuck. You only believe you’re stuck.

I thought I was stuck in my job. But I started writing online when we were away. It led to a full-time venture. My idea of ‘stuck’ was simply a construct formed in my mind.

And yes, I got rejected - passively and actively countless times. I’ve likely failed at getting work more than I’ve succeeded. But I’m still standing and for those successes, it was worth it.

Lesson #3: Everyone Wants the Same Things

We met a lot of people traveling. And we agreed: Despite this individualist culture we live in, everyone’s the same. Everyone wants the same things out of life. People want to be loved. They want to have a purpose. They care about others (for the most part). The world is mostly good. We just never hear about it.

There were so many kind people to offer advice and help along our way. Labels, political beliefs, opinions, etc. - It’s only the tip of the iceberg.

At our very core, we all want similar things out of life.

I hate to bring politics into the mix, but when we left, Trump had just been inaugurated. Most people we talked to in the States just wanted change. And that’s what Trump was to them. Maybe their views have drastically changed on their President since then - and maybe not. But it was understandable why things happened the way they did.

Lesson #4: Going With the Flow is Always Better

Roll with the punches. Ride that wave. Sometimes, you just have to accept that things are out of your control. And that’s okay.

We got kicked out of a couple of places in the middle of the night (van and car camper dwellers, you feel me here?). And when it rains, it pours.

This particular night our car battery was dead. Luckily, we have a standard vehicle. Half asleep and in full PJs, we were pushing the car to get it to jump start. We did this 3 more times. At first, we thought maybe the battery had to charge, so we drove to the gym in the morning (after again, pushing the car to jump start it). No luck. We pushed it out of the gym parking lot and drove to the closest garage. The price didn’t feel right, so we did the whole bit again.

Eventually, we changed the car battery in a Walmart parking lot ourselves. We had planned on working the majority of the day. By the time the battery was changed, it was coming up close to 3 pm. These things happen. And getting upset or angry about it would’ve only made it 100 times worse.

Sometimes, you just have to roll with it.

And a car battery wasn’t the end-all, be-all of our issues or setbacks. The weather would turn on us on a planned beach day. Google Maps would somehow lead us down yet another dead end. We wouldn’t have the service to work where we planned. A coffee shop would be closed. We went camping on an island we couldn’t leave after a certain time only to realize we didn’t have anything for dinner but pop-tarts.

It’s life. Some things just aren’t worth getting upset about. In other words, don’t sweat the small stuff. Life’s too short.

Lesson #5: We Take a Lot for Granted (And We Shouldn’t)

From this trip evolved a newfound appreciation for showers, wifi, and tap water. It sounds strange. But living on the road, these were sometimes the hardest amenities to find or the ones we were constantly running out of.

We blew through our phone data. We were constantly on the hunt for gyms so we could shower. Every day, we were buying or refilling giant jugs of water.

At home, we don’t have to worry about these things. In fact, I’ve never appreciated running water more - or endless amounts of wifi and data.

Surprisingly, we also missed having a place to ‘hang out.’ We missed having a couch to chill and talk with friends. We missed zoning out and watching TV (I freely admit that we did download the occasional show or movie, though).

They say you don’t miss something until you don’t have it. It’s true.

I barely noticed these things day-to-day. But after our car adventure, I now have a newfound appreciation for them.

The Best Things in Life Are the Most Difficult

I could’ve decided not to go. It would’ve been easier. I could’ve continued on in cruise-control.

But I’ve realized I don’t want to. I’d rather be in control.

I’d rather keep pushing my comfort zone than get too comfortable.

So, grab that steering wheel and hit the gas pedal. It’s time to flip your perspective and take back control of your life. And no, you don’t have to convert your little car into a camper. It could be something as simple as a new hobby, a new job, or a new city - whatever works.

Make a change when you know you need to. Appreciate the small things. Push through tough times. Adapt. Rid yourself of junk that’s weighing you down. Go after what you want - only you can. Make your life what you want it to be - not what everyone around you expects it to be. This is your life, and you’re the only one that can live it.

How To Forgive, Even When You Don’t Want To

7 Ways to Beat the Winter Blues

Why is Mindfulness So Difficult? (& What to Do About It)

6 Ways to Be a Mindful Shopper This Holiday Season

The Essential Guide to Your Throat Chakra