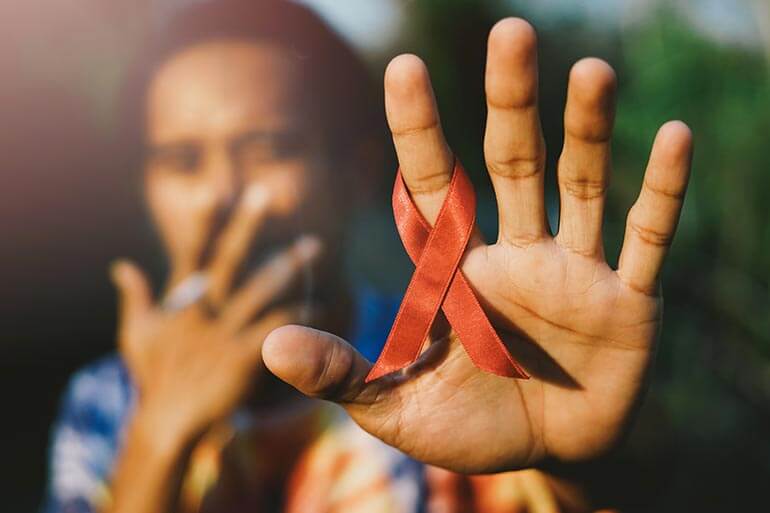 1.1 million people in the United States are living with HIV.

HIV and AIDS are often considered a problem of the ‘80s. These diseases were unknown and it was scary. Misconceptions and misinformation spread.

It wasn’t until Princess Diana was photographed in 1987 that the stigma surrounding those with HIV and AIDS began to disappear. It broke down barriers. Diana didn’t wear gloves and openly shook hand with an AIDS patient. The irrational fear that the disease could be spread through skin-on-skin contact was challenged. It changed things.

A Brief History of HIV & AIDS

The current epidemic stretches back to the 1970s - with origins rooted in the 1920s when HIV is thought to have been first transferred from chimpanzees to humans. When the retro ‘80s decade began, HIV was present on 5 continents, with 100,000 to 300,000 cases. Originally thought to be limited to gay men, the ‘80s proved that heterosexual couples could also contract the disease.

With the number of reported cases growing daily, organizations such as the World Health Organization, launched campaigns and scientific studies to promote awareness and find a viable solution.

Why Does it Matter Today?

HIV and AIDS are still present. Scientists haven’t eradicated the disease. New cases are still popping up, putting HIV/AIDS health matters at the top of many researchers’ minds.

While there is still no cure, antiretroviral drugs continue to improve. And research is promising. WebMD states that antiretroviral drugs help fight infections and improve an individual’s quality of life. There are even cases where the HIV viral load in an individual has become undetectable. However, it’s not enough for doctors to say that the disease is in remission.

The other side is that there are still populations that are misinformed and undereducated on the topic. While many initiatives have sought to improve this, we can always do better. And perhaps that’s the drive behind September 18th, which marks National HIV/AIDS Awareness Day.

The good news: The number of new cases is dropping. The hope is that further raised awareness and education on the topic will continue to lower the numbers. With time, the goal is to eradicate the disease entirely.

We hear a lot about it. But when do we actually define it?

Let’s break it down.

Essentially, it interferes with your body’s ability to tackle and evade foreign organisms. Symptoms frequently begin with flu-like symptoms or infections. At first, it may seem mild and nothing to panic about. After all, people get sick all the time. The problem begins when it spreads, causing chronic symptoms. This takes about 10 years and sometimes, the condition may go undetected.

Clinically-speaking, HIV becomes AIDS when an individual’s white blood cell count decreases below the 200 mark. By the time it has turned into AIDS, the immune system has been seriously damaged.

For example, at this stage, cancer is more likely. Individuals produce cancerous cells all the time. However, our body is quick to get rid of it and flush it out. For someone with AIDS, their immune system is unable to do so. They don’t have enough functioning immune cells to defend their body. They may get cancer or an infection. And unfortunately, this is often what causes their death.

Luckily, today many do not reach the AIDS stage. It is frequently caught early enough and medications help keep the condition at bay.

However, over 35 million people have died from the disease. And its effects should not be underestimated. Freddie Mercury and Rock Hudson are some of the few household and celebrity names that have died from HIV/AIDS.

Prevention is the first line of defence.

To reduce your risk, practice protected sex. Use a condom. Talk to your sexual partners. Discuss health beforehand. As awkward as it may be, it can save your life. HIV/AIDS is not the only disease transmitted through sex.

Don’t inject drugs. If you must, don’t share needles. Sterile equipment is best.

Get tested. If you think you may be at risk of HIV/AIDS or other diseases transmitted through needles or sex, talk to your doctor. Get checked. Knowing is better than being left in the dark about it until it is too late.

And suggest your partner gets tested as well. It’s not that you don’t trust them. But if it’s something they don’t know they have, then they can’t let you know.

Not surprisingly, HIV can be passed from mother to baby. However, medication can reduce this risk. If you are HIV positive and are pregnant, talk to your family doctor about your options - they do exist. You can limit the risk.

For more information, the CDC has a thorough FAQ section on prevention. You can find it by clicking here. There are a lot of resources on the web regarding HIV/AIDS. Use them to your advantage and learn about it. Why? Because your life and your health matters.

In the 1980s, HIV/AIDS sent shock waves through communities and countries. People were terrified. They heard about friends who knew people who had died from it. They knew people that had died from it. Fear ignites rumours and irrational thought. It was the 80s and 90s bigger version of Ebola. However, living in the information age, we are more aware than ever before.

Today, over 50% of individuals living with HIV are receiving antiretroviral drug treatment. Further, individuals where the virus is no longer detectable (via viral load testing) are not able to pass on the disease. These facts trigger hope for the future - a bright future where HIV/AIDS doesn’t exist.

In the meantime, awareness is essential to ensure this upward climb. Get informed and stay informed! Pass it on and take part in an HIV/AIDS initiative in your community on September 18th.

Holiday Detox: A Yoga Flow to Get Back in Your Groove

What is Your Guilty Pleasure, Based on Your Myers-Briggs Personality Type

How to Make Pasta Alla Norma

The Fight for Environmental Sustainability: Can You Do More?