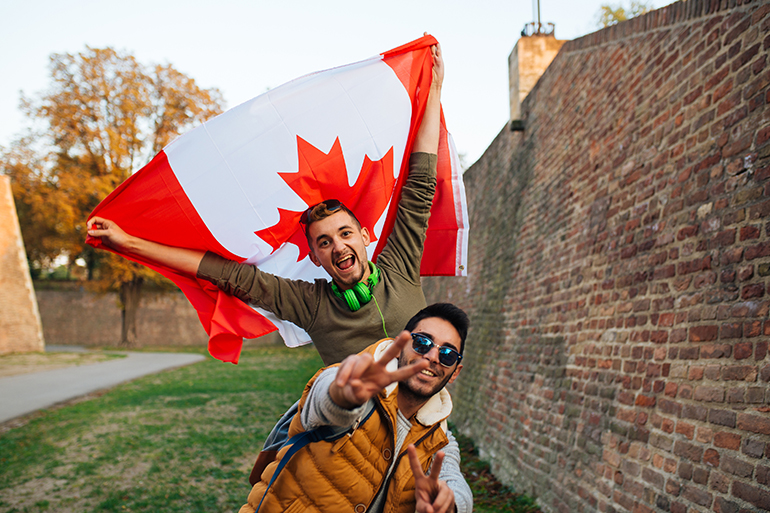 Here’s Why Canadians are So Happy – And How You Can Be, Too

The United Nations recently sponsored a global survey whose results show Canada to be one of the happiest countries in the world. And while stereotyping a group of people is typically a no-no, it seems nearly impossible to resist associating Canadians with kindness and joy.

According to the World Happiness Report compiled in 2013, the majority of Canada’s residents measured their happiness at around 7.5 on a scale from 0 to 10, and this is not the only time that Canada has been ranked as such.

What Makes Canadians So Happy?

As it turns out, there are a few consistent behaviors found across Canadian citizens that contribute to the overall happiness of this beautiful country, including kindness, respect for others, embracing diversity and promoting family values, among other qualities.

One attribute that seems ubiquitous among Canadians is kindness. There is an ongoing joke among both Canadian citizens and people from other countries that Canada is a very apologetic nation. It seems that Canadians say “sorry” much more than many other cultures, and while this might seem funny in certain contexts, this habit points to the inherent kindness that Canadians exude.

There have been studies that suggest the frequent use of the word “sorry” among Canadians stems from a desire to respect social norms, promote harmony within interactions and make sure that a conversation goes smoothly. The thoughtfulness and courtesy that flow within this culture are certainly partially responsible for the overall happiness experienced by its citizens.

A Sense of Humor

There are innumerable comedians and hysterically funny actors that Canada has gifted to the world, and it seems that having a good sense of humor is nearly synonymous with being Canadian. Jim Carrey, Mike Myers, Howie Mandel, Lorne Michaels, John Candy and Seth Rogen are but a few Canadian comedians that have brought laughter and joy into the world. Canadians seem to understand inherently that laughter really is the best medicine, and they enjoy their daily dose.

Canada’s government is clear about supporting its citizens, with its generous health care and maternal and paternal leave policies. Eligible parents to a newborn or adopted child are given the option to split 35 weeks of leave, while the standard amount of time offered to new mothers is 17 weeks.

Canadian citizens feel looked after and supported, especially when creating their families.

Canada was the 4th country in the world to legalize same-sex marriage, paving the way for equality in other countries for the LGBT community. Furthermore, giant, inclusive pride parades are held annually in every major city in Canada.

Canadian citizens also celebrate diversity within their country, embracing the many cultures that exist within its borders. There are nearly 200 countries that the communities within Canada represent, and Canadians honor this diversity through festivals and yearly celebrations, such as the Ottawa Summer Solstice Indigenous Art Festival.

Despite colder climates than other countries, Canadians seem to be happy even in the harshest weather conditions. It seems that this trend boils down to Canadians being a generally positive people.

While one study suggested that Canadians aren’t actually happier than Americans and that Americans simply perceive this politeness due to Canadian citizens being more civil on Twitter, it seems that civility is evidence that Canadians are more concerned with spreading positivity.

When a culture is communally working toward a goal of positivity, the negative experiences of life don’t hold quite as much weight. The power of positivity is real, despite what the cynics may say. Negative energy can spread like wildfire and take down the spirit of those who cross its path.

Spreading positivity requires more effort and thought, however, the results are infinitely more impactful. Spreading joy among your peers can have the same snowball effect as being grumpy, however, the overwhelming feeling of knowing that you’re increasing the world’s supply of happiness cannot be beat.

While the stereotype of the happiness experienced by Canadian citizens may be somewhat exaggerated, it does appear that these communities are more concerned about being kind to others and doing their best not to insert more anger into the world.

Spreading positivity can be as easy as holding the door for someone or letting someone go ahead of you in line. It boils down to the little things, the consideration for others that might be the slightest inconvenience for you but brings the biggest smile to someone else’s face.

Having a bad day? Try volunteering for the local animal shelter. Spend some time with senior citizens who don’t get out much or see what you can do for your elderly neighbor – like bringing in the groceries or even helping with a meal or two.

Giving to others and doing what you can to bring happiness into the world will only make you feel happier.

Feed Your Body Friday: 3 Recipes for Your Root Chakra

The Secret to Becoming an Early Morning Exerciser