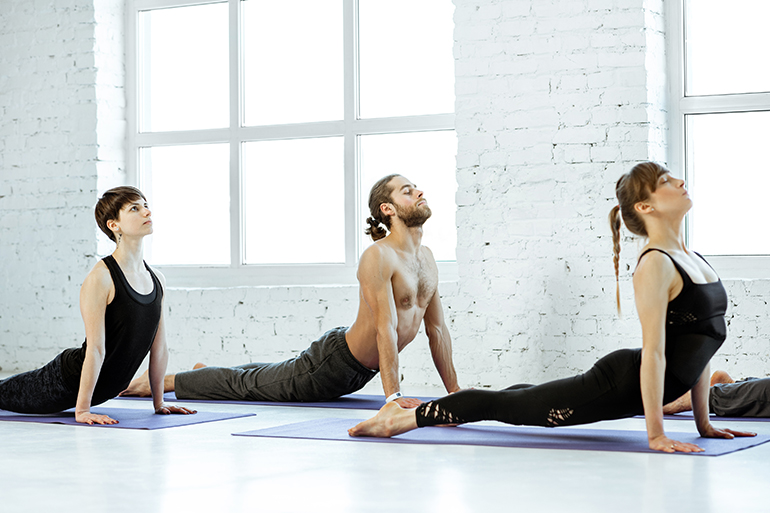 All You Need to Know About Ashtanga Yoga

Have you ever looked at the schedule of a yoga studio and seen the mysterious word Ashtanga?

Ashtanga yoga is perhaps the most challenging physical practice of all the different types of yoga in the West. It is meant to be practiced daily and usually includes advanced postures, like handstands, binds, and all sorts of contortion poses. If you are someone who likes to sweat and you can’t wait for that Vinyasa class with the ‘really difficult’ teacher, an ashtanga practice may be your new thing! It’s often taken up by former athletes and people who tend to like a challenge.

Although Ashtanga yoga is not easy for most beginners, if you’re brave and bold, this rigorous style of yoga is one that can utterly transform your mind and body. It requires discipline, commitment, and patience. If you don’t have those starting out, ashtanga will certainly help build them in you.

What Is Ashtanga Yoga?

Ashtanga inspires us to see what the human body and mind is actually capable of.

The practice of Ashtanga yoga includes a lot of the Vinyasa-style chaturangas and you will always warm up with 10 sun salutations. Ashtanga yoga will stretch the major joints and increase flexibility in your body quickly. It will also build strength, confidence, and the inner fire that speeds up your metabolism. When you learn to link your breath to movement, you can control your stress and emotions with much more ease.

Yoga in all its forms is ultimately a way to have control over your mind so that you are not controlled by it. This will bring you up against your stories of ‘I can’t,’ or ‘I want to quit,’ and it will help you see how your mind creates excuses. It will improve the health of your physical systems as well. For those with injuries, it may prove a bit more difficult to progress from one series to the next.

The goal of most Ashtanga yogis is to progress over the years to the fifth series, which not many people can do. But your goal does not have to be the “intended” goal of yoga. Let’s look at the origins and practice so you know all about ashtanga yoga when you show up to class.

Pattabhi Jois brought Ashtanga yoga to the West, and with it some traditions that are still used in classes to this day.

Ashtanga yoga classes begin with the invocation chant. It is recited in Sanskrit with palms together standing at the front of the mat. It is chanted to shift the vibration of the student to a higher level. The opening chant does not need to be memorized for you to attend class. There is also a closing chant which is meant to seal the practice peacefully and it reminds the yogi to dedicate their improved energy to helping the world.

Sri Pattabhi Jois left his body in 2009 and his students are still teaching to this day. He established the Astanga Yoga Research Institute in Mysore, India. He has a book called Yoga Mala: The Original Teachings of Ashtanga Yoga, which explains the philosophy of yoga known as the 8 limbs and also has pictures of the poses with instructions. That said, if you’re new to yoga or the Ashtanga practice, these poses should not be tried at home because the practice is so challenging.

There are five series total that one works towards in sequential order. A student is not to move onto the next series until they are able to do the entire previous series. They may do the same sequence of poses for years working towards improving their strength and flexibility. The Ashtanga primary series is what everyone starts out practicing. It includes series A and series B. Series A is a set of sun salutations called Surya Namaskar.

The class is often taught only in Sanskrit and it would be good to familiarize yourself with the sequence and Sanskrit terms before attending. The Ashtanga primary series video will help you familiarize yourself with the Sanskrit words. You can pick up on the terms quickly in class because they are repeated so often in the class. Many students use the cheat sheets which have tiny pictures of each pose in order. You can have it at the front of your mat while you memorize the sequence. This also makes your practice mobile so that you can practice at home, in a park, or while traveling so you don’t miss your practice.

How To Do a Jump Back

The pace of Ashtanga yoga is fast and one move you can work on ahead of time is the jump back. The jump back is used to transition from each pose to the chaturanga, which is also called the yogi push-up. It’s not too hard, it just takes some getting used to.

Start in a cross-legged position and lean back slightly to get momentum. Then lean forward, planting your palms outside the legs as you engage the core and lift your hips, springing the legs straight back so you land in a low push-up/plank position.

You now know much more than the average person about Ashtanga yoga! The type of commitment it requires can be a solace for those looking for a new healthy habit. Yoga in any form creates a healthy environment where you can test your limits and overcome them.

We hope you found this beginner’s guide to Ashtanga yoga helpful and inspiring. Perhaps you feel called to try it our maybe it’s piqued your interest. Yoga has so many different styles, so even if you don’t think yoga is your thing, chances are there’s a yoga style that will work for you. Keep exploring!

How to Make Homemade Baklava

The Top 6 Foods to Relieve Bloating

The 4 Different Types of Stress & How to Manage Them

The Best Workout for You, Based on Your Enneagram Personality Type